Glendyne students back on track

Three years ago, a team from Carinity Education Glendyne were the first students from the small Hervey Bay school to participate in the popular Queensland human powered vehicle (HPV) circuit.

However, over the next two years the team’s racing ambitions stalled, firstly due to not having a vehicle and then because of COVID-19. After last year’s HPV races were cancelled due to the pandemic, the school’s team – dubbed ‘Team Velocity’ – is back on track.

In September they will compete in the Fraser Coast Technology Challenge, a 24-hour endurance race through the streets of Maryborough which is expected to attract more than 100 teams. The largest student participation event in Queensland, the event sees school groups design, build, test and race pedal-powered vehicles.

Tracey MacDonald, a vocational education trainer at the special assistance school and Team Velocity’s co-manager, said the HPV program had created a “unique bond across several age groups” of students, some of whom have faced barriers to education.

“The students are always keen. Their leadership skills, team goal setting, teamwork and self-regulation has developed over the year. We are also trying to instil personal goal-setting that entails doing training in their own time that will build personal discipline and resilience,” Tracey said.

Team Velocity member and Year 10 student, Rani Mogler, enjoys both the on-track action and developing relationships with his teammates.

“Going fast in the HPV and trying to overtake other teams during a race is awesome fun, sometimes the crashes too. Just being with my mates has been great,” he said.

Team Velocity’s first race this year – the Queensland Pedal Prix Super Series event held in Bundaberg in May – exemplified the students’ resilience and determination. The team completed 200 laps of the circuit in eight hours and recorded a top-20 finish, from 48 entries.

“The hearts of these kids are huge, and they always set out to not let us down. The competitive spirit that they carry is heart-warming and a true eye opener to those given the privilege to experience,” Tracey said.

A small cog in the wheel of the team has been the support of sponsors including Hervey Bay and Maryborough businesses Sign Doctor and Wilcox Bikes and the Rotary Club of Hervey Bay City.

The partnership with Rotary continues a long history of collaboration with Carinity Education Glendyne since the school’s inception in the 1990s. This has included Rotary members and students disassembling disused pushbikes to make wheelchairs for people in developing countries.

“It helps students to feel confident, learn about themselves and be dedicated to a task. There is also the realisation of the hard work that goes into enabling them to jump into the vehicle and race,” Elizabeth said.

“I hope the experience gives them a sense of achievement and that they will be proud of themselves, and their parents get to see what their children are capable of when given the opportunity.”

To sponsor Team Velocity or to find out more about Carinity Education Glendyne visit the school’s website or phone 4128 6199. 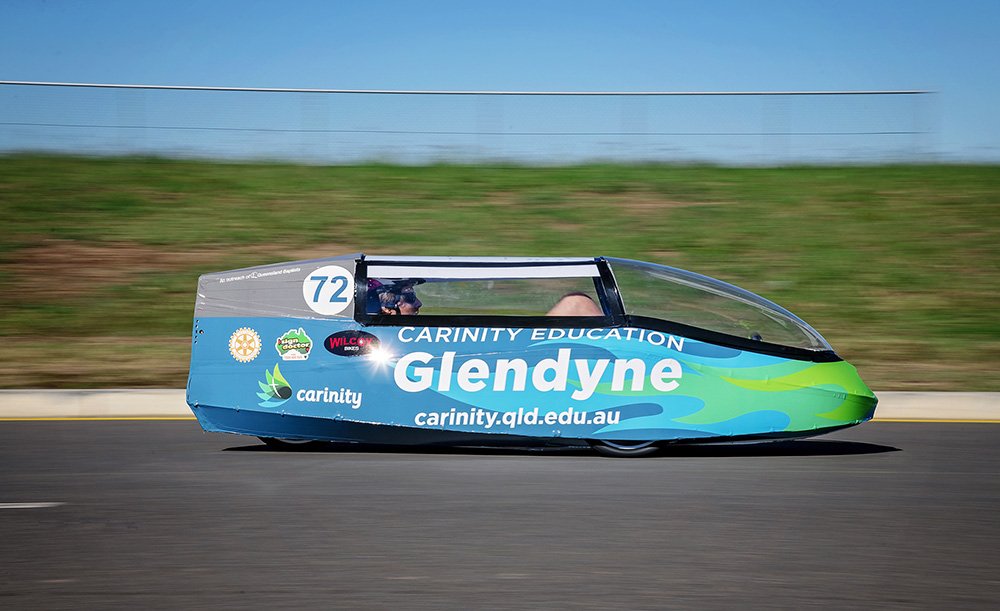 David Edgar attributes staying active and a long and happy marriage to him reaching 100 years of age. The Carinity Hilltop aged care community resident was born in Brisbane in 1922 and served in World War II.

Born on the small Greek island of Kythira and described by her daughter as “captivatingly eccentric”, Coola Velis will celebrate her 100th birthday at Carinity Wishart Gardens aged care in Brisbane on June 14.