Stevie expressing her heritage through art

“I didn’t really fit into mainstream schools. I didn’t get as much help from teachers. There was more support at Southside, the teachers were really encouraging and made you feel welcome.”

For Stevie O’Chin, transferring schools to Carinity Education Southside was the catalyst for developing her self-confidence – and the start of her journey towards a career as an artist.

“Art was my favourite subject at school. I would always be in the art room in my lunch breaks just painting. I had done art as a hobby but didn’t think I could make a career out of it until Bec, our art teacher, really encouraged me and pushed me to keep going with things,” Stevie said.

“Stevie was very withdrawn, but she opened up in Year 12. I discovered her skills with dot painting. Once I saw her works, I encouraged her to paint more and she worked on other styles and techniques while in class,” Bec said.

“I entered her artwork into an art show. We decided to silent auction the piece and it went for $800 – her first sold artwork. Stevie got commissions for works after that and slowly grew a good reputation by word of mouth.”

Stevie was “pretty shocked” that her painting sold for a sizeable amount, adding, “I didn’t think anyone would pay that much for my artwork.” It was the moment she considered pursuing art as a career.

After graduating from school in 2016, the now 24-year-old completed a Diploma in Visual Arts at Southbank TAFE, then enrolled in the Bachelor of Visual Arts course with the University of Canberra.

Stevie now works as a professional artist exhibiting with Birrunga Gallery, which specialises in art by Indigenous Australian creatives. She is a Brisbane Portrait Prize finalist and sold artwork to collectors in Australia and abroad, including a buyer from Dubai.

Family and her Indigenous Australian heritage are the main inspirations for Stevie’s art.

“My family history is something that I want to carry on, so it’s not forgotten. Most of my artworks are based on Indigenous themes and I do a lot of dots and symbols,” she said.

“Southside encouraged me to express my heritage through my art. The First Nation aunties at the school were role models. They were really good to all of us, and I love them.”

“I believe she really enjoyed her time at Southside and her family are extremely impressed with the help, support, encouragement and guidance she received there,” Bec said.

“The art show Southside had seven years ago changed the course of Stevie’s life and I am so proud to have been part of that journey with her.”

Stevie added: “I was really lost with where I was going to go after school but being at Southside really guided me towards what I’m doing now. I think I’ve come pretty far from where I started. I think I’m going to do art for life.” 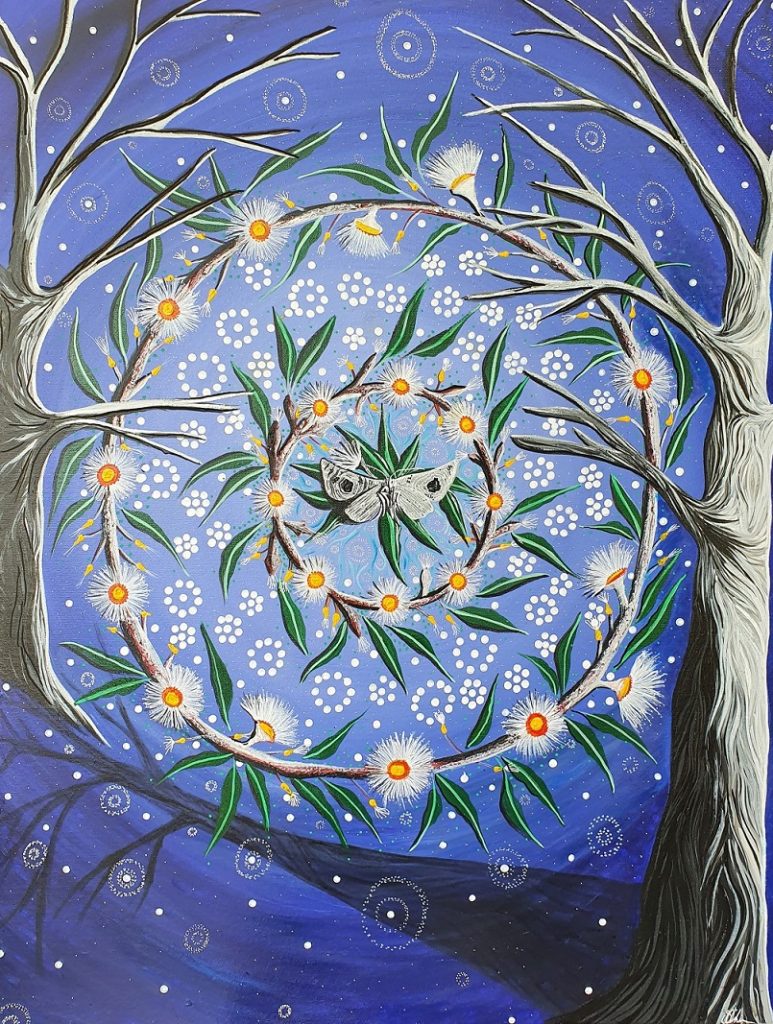 Stevie’s paintings have been sold around Australia and abroad, including in the Middle East.

A Moreton Bay youth and family counselling centre which has supported hundreds of children and adolescents to create more positive futures is celebrating a milestone.

Carinity and churches come together to fight disadvantage

Carinity volunteers give back to support local community

Was your New Year’s resolution to give back to your local community? Volunteering with Carinity is a meaningful way to support others in your neighbourhood.